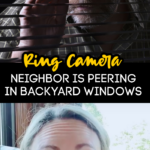 This Woman Claims Her Neighbor Is Using His Ring Camera To Look Out The Windows Of His House, And It’s Giving Me All The Stalker Vibes.

Samantha Richardson turned to TikTok to help her find a way to stop her neighbor from watching her home using her Ring camera.

How is this allowed?

She says she tried everything to prevent him from being a voyeur in their daily life.

As you probably already know, Ring cameras are typically used to monitor your own property. People use them as doorbell cameras, to monitor the front of their house – usually activity at their front door.

That’s not how Samantha’s neighbor chose to use her ring light. No, he got scary with it.

Obviously he’s trying to see into our house.

In the original video, posted by user @livingrichardson, she tells us that her neighbor installed his Ring camera at the very edge of his property, along his fence. The awkward angle of the camera looks straight into the windows of her house.

He tilted it so he could see all over our garden, all the windows, our house – where our children sleep, our living room and our three bathrooms.

They tried to put up a trellis that would block his view of the house. It still allowed the guy to see past his fence, but it prevented him from seeing into their house.

However, they soon realized that he had just moved the camera further into the fence and adjusted the angle so that it was still looking into the house.

It’s kinda gross and weird enough that the dude can watch almost their every move.

The neighbor could watch the 11-year-old get dressed

But, what makes things even worse is that Samantha has a young girl who dresses in the rooms he can see.

We have an 11 year old daughter, who doesn’t look like an 11 year old, and she changes right in those windows where like our lanai is going into our pool.

They even had a sheriff come to the house, hoping he could make things better.

The sheriff agreed with the Richardsons that it was scary, but said there was nothing he could do about the situation.

He tried to go talk to the neighbor, telling him that the family was not comfortable with the placement of the camera.

The guy told the sheriff he had the camera to monitor the pond. The pond happens to be on the other side of the Richardson property, and there’s absolutely no reason he should have to watch the pond.

The only way to block his view of our house is to build a taller fence.

There is a catch to this. They would have to get permission from the city to build the fence, and the city doesn’t like to allow monstrous fences to be built.

This mom begs TikTok for suggestions on her watching neighbor

She begs for suggestions on how to get this guy to stop looking at their life through his camera.

There is a strong likelihood that we will now go to court over this dispute.

My first thought was, curtains. I don’t know why this easy fix hasn’t been tried. Maybe they don’t like curtains. It is their prerogative to have a house without window coverings.

TikTok users came up with all sorts of ideas. Everything from growing high corn, to using a red laser that points directly at their camera, and even putting up a sign in their front yard that lets everyone know what’s up. the neighbor.

This situation is just disgusting. I hope she gets real help, either from the police or from the courts.

To see Samantha’s full TikTok video on the situation, you can go HERE.